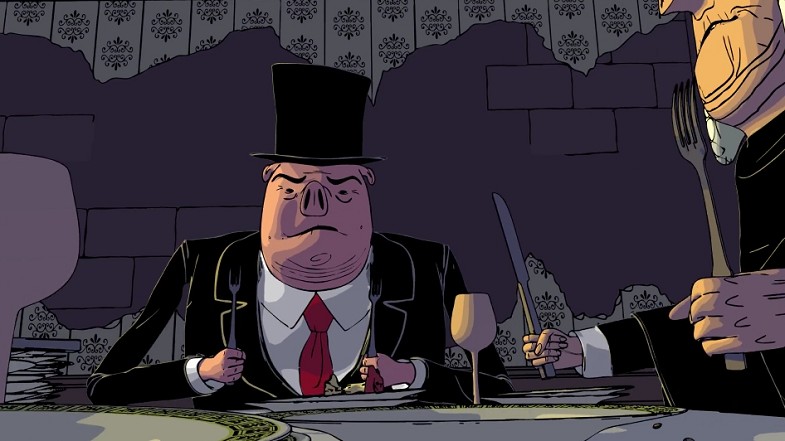 “Dinner For Few” is a ten minute CG-animated film depicting a sociopolitical allegory of our society.

During dinner, “the system” works like a well-oiled machine. It solely feeds the select few who eventually, foolishly consume all the resources while the rest survive on scraps from the table. Inevitably, when the supply is depleted, the struggle for what remains leads to catastrophic change.

Sadly, the offspring of this profound transition turn out not to be a sign of hope, but the spitting image of the parents.

EMMY award winning animation artist Nassos Vakalis directed and wrote the film and the animation was produced in the United States of America and Greece with the technical and artistic collaboration of Eva Vomhoff from Germany.

“Dinner For Few” is produced and funded by Nassos Vakalis and his wife Katerina Stergiopoulou. The original music is composed by Kostas Christides and performed by the Bratislava Symphonic Orchestra.

“Dinner For Few” was inspired by the economic recession affecting South European countries like Greece, Italy, Spain and Portugal. Nassos Vakalis grew up in Greece, where his family and most of his friends still live. “Dinner For Few” not only reflects his deep concern of the social and economic developments during the crisis but also highlights the inevitable and cyclical nature of the human affairs throughout history.

Through its festival run “Dinner for few” screened at over 250 international film festivals and won 78 awards. It was one of the 60 Animated Shorts that Qualified for the Academy Awards in 2015.